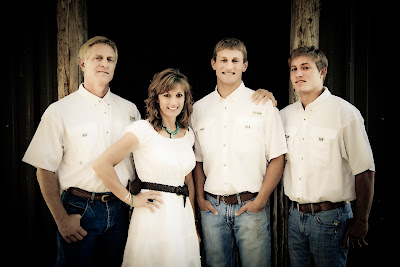 I love this recent family picture of my boys and me. As you can tell at a quick glance, my boys are the “spittin’ image” of their daddy. Check out Logan’s snarl. At least he chose to create some nice symmetry with the snarl on his dad’s face. Too, too funny! Another thing I love is to watch the three of them walking together. The swagger is exactly the same. The idiom “cut from the same cloth” could not be more accurate.

But, while Logan and Cameron may look just like Brad, they have more of my personality, especially when they’re pumped about something. When I’m super-hyper (as my boys call it), I can talk 95 mph and not even break a sweat. They can, too. This afternoon was a great example. Brad and I picked Cameron up from Duck Camp (think Fish Camp) at Tarleton, and despite his sleep-deprived state, he never quit talking. He’d start in on one story and then half-way through he’d think of two other ones to tell. I had a quiet little giggle up in the front seat because it was like listening to myself talk. I do the exact same thing, except now I have to have someone else remind me what story I was originally telling so I can go back and finish it. Anyway, mid-sentence into some story about a game they played, he totally changed gears and said, “I learned how to spin.” I have to confess. He’d lost me for just a minute. Spin? Thankfully, he immediately followed with, “Some girl asked me how I learned how to dance, and I told her my momma taught me how. Everyone thought that was a real hoot. I even taught two other guys how to dance, and I counted for them just like you did, Mom.” Now I got what “spin” meant, and, I absolutely loved it!
I did teach my boys how to two-step and waltz, and I tried several months ago to show Cam how to polka and spin me around. 1-2-3, 1-2-3, 1-2-3 … well, he got that part just fine, but when he tried to twirl me around and still polka at the same time, it got a little tricky. Needless to say, he didn’t quite master it. But, tonight as we were headed out the back door to go out to eat, Cam grabbed my arm and started humming! He begin to twirl and spin me around – behind his back, the pretzel … classic jitterbug turns! It was a riot! Brad had pulled the car around in the driveway, and he was watching us and just laughing!
Breathless and a little sweaty, Cam and I got in the car, and I said, “Which cutie pie taught you all those moves?” I was appropriately mommy thankful when he replied and said he mostly learned from watching others. Of course, I know better. Several more stories later, I learned there were actually several cutie pies responsible for his latest dance moves.
Now, several hours later, Cam’s comment is still on my mind. He’s right, you know. We learn an awful lot from watching others. And, it really makes me think about what others might be learning from watching me. Is it obvious that I love God? Do my words and actions reveal that He is the most important thing in my life? Does the way I spend my time and energy reflect that he is a priority above everything else? Do I put His love into action by serving others?
One of my favorite quotes says, “If you asked me what I came into this world to do, I will tell you: I came to live life out loud.” Sounds a little like Matthew 5:16, “In the same way, let your light shine before men, that they may see your good deeds and praise your Father in Heaven.” We are clearly called to become like Christ…to live our faith out loud in such a way that we draw others to Him. After all, we learn an awful lot from watching others.

1 thought on “My Momma Taught Me How”