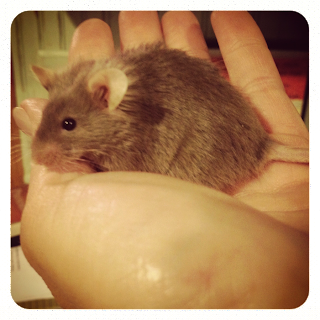 Here’s how the story started. It was about three weeks before Christmas. I received a text from Cameron.

Cameron: mom what do you want for christmas (Please note: The lack of capitals and punctuation is all him.)
Me (replying to Cameron and adding Logan to the text): An iHome dock for my iPhone/iPad and a fancy mouse.
Logan: what the heck is a fancy mouse. you mean a magic mouse.
Cameron: no stupid. she means a real mouse.
Me: Yes, I mean a real mouse. Female. Must be cute.
Now before you think I’m crazy, let me explain. I love critters. When the boys were little, I could never say no to a pet… and they knew it. We had Agnes and Irene, two rats we just loved. We also had Leopold, a leopard gecko, who in his latter stage of life I had to “help” him shed by removing partially shed skin with tweezers. We also tried numerous times to rescue bunnies, birds, and more. But my favorite pets were Brinkley, Oscar, and Lucy, our guinea pigs. I seriously contemplated asking the boys for a guinea pig for Christmas, but I was afraid Brad might wring my neck. I figured if I went with something a little smaller, it might be months before he’d notice. He typically doesn’t notice when I change my hair color or buy a new pair of shoes, so I thought I’d be safe with one teeny little mouse.
Very late on Christmas Eve, I made my last trip upstairs to tell the boys goodnight, and I found Cameron in the bathroom holding Miss Mouse. (Side note here: Her given name is Eleanor, but I’ve taken to calling her Miss Mouse.) It seems Logan and Cameron had been hiding her cage in the shower for several days. Logan was a little ticked that Cameron had spoiled the surprise before Christmas morning, but he got over it pretty quickly when he saw how much I loved Miss Mouse. She is the cutest!
Brad failed to notice the cage under the Christmas tree the next morning, but after blatant hints from the boys, he finally caught on. His only response was to repeatedly shake his head no. Of course I paid him absolutely no attention. After all, he had NOT given me the gift I’d ask him for, but that’s another story for another day. And, I’d already fallen in love with Miss Mouse, and she did not come with a money back guarantee.
So, fast forward several weeks. Miss Mouse’s cage has taken up semi-permanent residence (you’ll understand this a little later on in the story) on a small table in the kitchen. Yes, I know. That’s quite a thought. A woman who intentionally allows a mouse in her house, much less in her kitchen. The only reason my friends will continue to eat what I cook will be because they know I’m a neat freak and if Miss Mouse lives in my house then she is obviously the cleanest mouse on the face of the earth. She is.
And, I like having her in the kitchen because I can give her little treats, and it is so fun to watch her nibble and squeak at me. She loves Goldfish, Ritz crackers, biscuits (with butter), English muffin pieces with cinnamon and sugar, apple, pear, and just about anything else I’ve given her a little bite of. I’d like to say this says something about her tastes, but given that she has eaten almost all of an empty toilet paper roll, I’m not so sure.
Her favorite place to hide is a little basket hut that hangs from the ceiling of her cage. When Duchess and Winston bark too much, she immediately goes into hiding. Of course, I would, too, given that they’d love to rip her little head off if given half a chance. Anyway, I’m into mouse training, and I’m working hard to coax her out of the her little hut by calling her name and offering treats. It’s working!
So this past Wednesday, I hear noises coming from the kitchen. I can’t really tell what it is, but I know it’s not Miss Mouse running in her wheel. We have discerned that noise by now, especially in the middle of the night. I wander into the kitchen, and this is what I find: 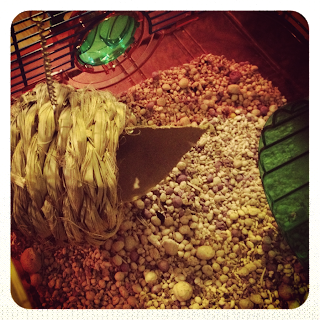 Oh my! Miss Mouse done drug her toilet paper roll into her hut. (Be sure you say that just like Minnie from The Help.) How on earth one teeny little mouse managed to do this, I do now know. I wish I could have seen her in action.

After I stopped laughing, I texted Brad and the boys the picture bearing evidence of just how clever my little mouse is. Brad immediately texted back:

“She’s been watching you constantly rearrange and is mimicking your behavior.”
He simply could not resist the opportunity to poke a little fun at me, and it is well-deserved. I am continually rearranging. Nothing is permanent in our house. I have these terrible bouts of clean it up and reorganize, as well as try something new and redecorate. It is very cheap entertainment, although it makes walking around in the dark of the night quite dangerous for others in the house.
After a good laugh, Miss Mouse’s episode of Extreme Makeover Home Edition got me to thinking.
If others are watching, would I want them to mimic what they see in me? When I’m irritated with the person in front of me at the gas pump because he’s taking too long… When I give a curt answer to Brad because I’ve had a hard day at work… When I gossip with a girlfriend … When I look at someone and judge based on the way she looks… When I walk past someone in need because I’m in too big a hurry to help… When I … When I… When I…
The simple truth is some times my faith comes out of my mouth, but it doesn’t make it all the way to my feet. I talk a good game, but my actions show I’m not doing anything more than taking up space on the sidelines.
God created me in His image, and He clearly calls me to live my faith out loud. Jesus set the perfect example for me. The question… Is my faith setting an example for others? Oh that I could live out the words that Paul wrote to the church in Corinth, “Follow my example, as I follow the example of Christ.” 1 Corinthians 11:1 NIV.