1. I have killed more than one rattlesnake by myself, as well as a some other snake that found its way into my outdoor birdcage.
2. I am able to independently remove all manner of scorpions, spiders, and even Mexican spiny lizards from my house. { Another disclaimer might be necessary here. I promise my house is not creepy. You have them, too. Ok. Maybe not the lizard, but let’s stay on topic. }
3. I can set a “snap trap” and even toss out the dead mouse without assistance.
4. I have repeatedly stayed by myself overnight… out in the country… where coyotes howl.
5. And if that is not convincing enough, I have been scuba diving, sky diving, hang gliding, and hot air ballooning.

All that to say. I am NOT a scaredy cat. About the only thing I’ve ever been scared of is being caught out in public without make-up, and I conquered that a long time ago.

But, regardless of my bravery, every now and then… Cue the music… Picture Kevin Bacon playing chicken on the tractors… I NEED A HERO! 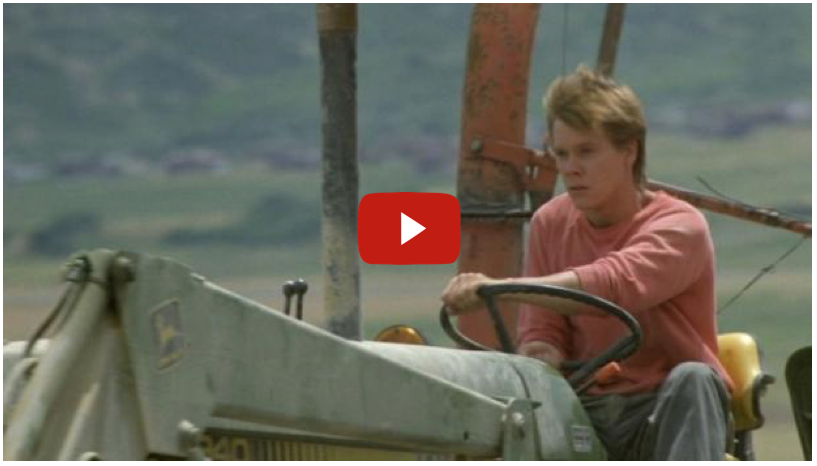 So it’s Monday night.
And that storm hits.
Now I like a good storm. I especially like lightning. Until it makes things in my house go crazy.

So Brad is asleep because after all, it is past 9:30. A flash of lightning, a loud boom, and then I hear this crazy clinking noise. What? So I get out of bed, wander around the house, and try to find the noise. It’s the chain on the ceiling fan upstairs, and it’s clinking against the globes on the lights because it’s going warp speed. It’s a bit odd because the ceiling fan has not been turned on in weeks, but nonetheless, I go upstairs, turn the ceiling fan off, and go back to bed.

Flash. Boom. Clink.
I am not kidding.
I go back upstairs again, thinking surely I have lost my mind.
I turn it off again.
And this time I stand there to make sure.
Back to bed.

Flash. Boom. Clink.
Ok. This time I’m not having it.
“Brad, wake up. We are having a storm, and something is wrong with the ceiling fan upstairs.”

Well, needless to say, I think Brad is as sexy as Kevin Bacon, but Bonnie Tyler will not be singing “I Need A Hero” for him, because he wasn’t having any part it. He unequivocally told me, “It’s just a storm. Go to sleep.” Of course, y’all know I don’t take no for an answer, so he went upstairs and turned the ceiling fan off for the third time. And as he stomped up the stairs I told him, “Sometimes I just need a hero.”

Heroes are the ones pointing others to Christ. They’ll take the risk, make the sacrifice, pay the cost, walk the talk, and do the work. They’ll go to the hard places, get their hands dirty, and give what they don’t have. They’ll love the unlovable and pour out grace to the unworthy. They know they’re weak, but they are still willing. And they may be fearful, but they will still be faithful.

Our world does not need more star performers on the field or the stage. Our world needs you and me to say yes to Jesus’s command: “Love each other as I have loved you. Greater love has no one than this: to lay down one’s life for one’s friends.”

May we know Him and make Him known!