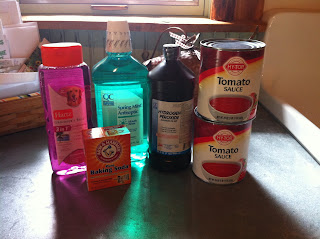 Today was definitely Monday. I was being amazingly productive in my upstairs office, and things were actually looking pretty good until about noon. Duchess and Winston decided they needed a potty break, and since it’s necessary to walk down the stairs to let them out the back door, I decided I might as well have lunch. Delicious, low calorie tuna. I could hardly wait. What I really wanted was to devour the bag of Double Stuff Oreos, but that’s just extraneous information to this story.

So, I let the pups out the back door, and I proceeded to the kitchen to mix the tuna with a small spoonful of Miracle Whip. Clearly I know where the calories come from. If I had any hopes of an Oreo, I needed to go easy on the Miracle Whip. As I was draining the water from the tuna can, I glance out the kitchen window. Holy smokes! There was a skunk IN THE YARD! Now, at this point I should mention that I’m aging rapidly and I don’t more near as fast as I used to, but I tore out that back door like my very life depended on. I was going to rescue my pups from that skunk before…
Of course, it’s a very good thing my very life doesn’t depend on my speed because I was WAY TOO LATE! The stench about knocked me over the minute I opened the door. While the not so adorable skunk roamed the fence line frantically searching for a way out, I began screaming my head off like a mad woman for the pups. And then I spotted her. Duchess. She was rubbing her head on the ground so violently, it’s a wonder she didn’t rub a bald spot. I snatched her up, trying all the while not too gag, and continued the yelling for Winston. He trotted up from the back yard, and when the stench hit him, he looked about as unhappy at his sister as I was. I snatched him up, too, and into the house we went.
Now let me pause here. I realize that taking the stench into the house was not exactly the best idea, but work with me here. The skunk WAS STILL IN THE YARD! One of us had to leave.
The minute we were in the door, I freed Winston so the stench wouldn’t rub off on him. I raced to the bathroom and deposited Duchess in the bathtub. I should note here that I have now successfully spread the smell from the back door, into the kitchen, into the living room, into the master bedroom, and into the master bath.
At this point, it was time to grab my cell phone. No, I was not calling 911 or my husband, as both would be of little help. I needed to google how to deskunk a dog. I typed just that – deskunk dog. You will be surprised to know that Google yielded 704,000 results in just 0.16 seconds. Thank God for Google!
I immediately began reading. Option 1. Tomato sauce. Option 2. Mouthwash. Option 3. Hydrogen peroxide, baking soda, and dish soap (with a note of caution that this mixture can be explosive – seriously!). Praise God! Solutions! Until I discovered I had none of those options with the exception of one 4 ounce can of tomato sauce. Although I’m not a rocket scientist, I was fairly sure that wasn’t going to cut it.
So, I decided to rely on one of my Granny’s favorite smell removers. Vinegar! I had some. In fact, a whole gallon. Do not ask. I don’t have a single clue why I had a gallon of vinegar, but at the very instant I discovered I did, I believed with all my heart that it was divine intervention and I immediately began thanking God.
Until I discovered vinegar does NOT, in fact, deskunk a dog.
With Duchess in the my whirlpool tub, I made a mad dash to Brookshire’s and frantically grabbed the biggest bottle of peroxide they had, two jumbo cans of tomato juice, a large bottle of the generic mouthwash (Hello! I’m a bargain gal!), a small box of baking soda, and dog shampoo. Oh, and a York peppermint patty. After all, my tuna sat uneaten on the counter and I was needing chocolate. As the young chic checked me out, she stared rather obviously at my groceries and commented innocently, “This is a strange combination of things.” Ding! Ding! Ding! We have a winner! I quickly replied I was on a mission to deskunk a dog as if that explained everything. I left her shaking her head and probably contemplating whether or not she should call the manager.
Seven.baths.later. Duchess has been deskunked… mostly. Enough that we can stand having her in the house.
I mentioned before that Duchess is Brad’s dog. Guess that explains why she is the one who got sprayed. Just saying. Once she was deskunked, I called Brad to report what she had done. He later sent me this email with a subject line of “Getting Suspicious”:
“The more I think about this story of “Winston was in the back and I ran outside to get him,’ I’m thinking something does not add up here. He’s the little dog that chases everything. They typically are together when outside. If you saw the skunk and then let her out. God saw what you did. You can’t lie to Him. You’ll have to live with the awful thing you’ve done.”
Seriously. Someone needs to call WPS. Wife Protection Services. Enough of this abuse.
Now you know what my line is here. All this got me to thinking…
I am so thankful it doesn’t take seven baths, vinegar, tomato juice, mouthwash, peroxide, baking soda, dish soap, and dog shampoo to get MY stink off… even when I manage to get more stinky than Duchess.
Sometimes my attitude is stinky. Sometimes my words are stinky. Sometimes my actions are stinky.
But I have the promise of John 3:16, “For God so loved the world that he gave his only begotten Son, that whosoever believeth in him should not perish, but have everlasting life.”
The blood of Christ has bathed and washed me clean.
That’s how you get the stink off.